With the very first 'Hide the Bacon' scavenger hunt coming up for the fledgling Team Bacon! I decided to interview two of the founding members: AllegroArts and Illustrate. (You may remember Allegro from a previous post of mine.) Since bacon figures so prominently in this blog (and my life... I love bacon and I am a member of Team Bacon myself) it only seemed natural to put them on my blog! I asked them both the same questions, so if they repeat some of the stuff... that is my fault. You can blame me :)
___ 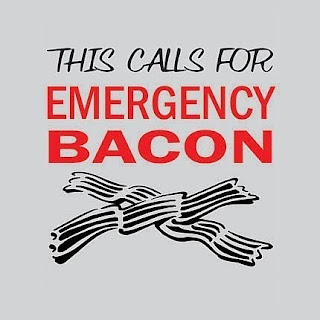 Who are you, what are your shops and what position do you hold in Team Bacon!?
A: AllegroArts, but most people just call me Lego. Im the nut that was crazy enough to start this team.

I: My name is David, and I manage the Team Bacon! blog. I have an Etsy shop, Illustrate , and I share a shop with my girlfriend Kristin: Iseababejewelry . Kristin has her own shop, too: Iseababe
Who are some of the other important people in the team?
A: There are so many! Yes, we have a lot, I have to keep a spreadsheet just to know who is doing what. Illustrate, of course, is the guy behind the blog and a big driving force for promotions. ZestyB runs our Ning page. SugarCubeDesign runs the monthly team chats. Zippityduda runs our finances. Clockworkjungles is our head twitterer. KitchenKitsch is in charge of team bios, she'll have the "Meet the Meats" column coming up soon. And there are soooo many people that contribute to the blog. The level of participation has been amazing.
I: Everyone on the team is important. Kristin is my girlfriend, and she is on the team. She is pretty important! There are several who have stepped up as organizers and blog writers. I appreciate them more than they know. The most important people on our team are the ones who want to participate.

What is so special about Team Bacon!? What is the point of the team?
A: The way we were formed is much different than most other teams. We don't all come from the same area or have the same medium. We are mostly the people who meet daily in ETC and enjoy the odd humor that goes on there. But that's a good thing, it sets us apart. We bring together people with an incredible array of skills and experience. Just look at what we've been able to accomplish in our first month. We're already one of the most well known and talked about teams on Etsy.

I: The only thing special about Team Bacon! is the members themselves. The nice thing about Team Bacon! is that we are not bound by a craft, art discipline or location. The products in the shops of the team are as diverse as the people who run them. Team Bacon! has a great sense of humor as well. Our team is pretty quirky, and that makes it fun. If your readers ever need a pick me up during the day, just drop by our team thread. There is always something going on.
I: The deeper point of Team Bacon! is to give us all a place to hang out. Over the last month and a half, we have developed more ways to communicate with each other and help each other out. There is so much support for each other. It is amazing to see, and it happens every day.
Tell us a bit more about some upcoming tasty contests! I hear they involve hiding some bacon!
A: Ah, yes, the great "Hide the Bacon!" promotion. Starting May 17th, we invite anyone to try to find a special Bacon picture hidden in the shops of team members. Find them all, and win something special from one of the shops. I anticipate lots of confusion and chaos, plus some very driven participants who manage to find more bacon than we thought possible. We're also cross promoting with giveaways on other well established blogs, so I expect many new fans from that.

I: If you want to play Hide the Bacon! with us, come to our blog on May 17. Most of our shops have donated a prize for our giveaway. I think we are up to about 25 prizes. I am giving away a pure silver ring.

The Team Bacon! blog is quite extensive. If you were giving a tour of the most important places to check out, what would they be and why?
A: Well, the "Allegros Announcements" section is clearly the most important part of the blog. Do you really need anything else? Ok... the giveaways section is probably the most popular. Who doesnt love free stuff? Koko's Cooking has a lot of fans. Great recipes and cute kids. The 'Sea Babe Sells' and 'Business Bites' sections by Seababe and Mindless have been well received. And the Rob White interview was really popular, lots of new fans came in to see that.

I: Six Degrees of Etsy Bacon is more of a web site than a traditional blog. We like this format because it gives everyone an opportunity to have their own page on the site. The most important place is becoming our team forum. Even non-members are welcome. Please be respectful.

Does Team Bacon! have an Etsy shop?

A: Not yet, but soon!
I: I believe there is a team shop, although I have not seen it yet.

What is it about bacon that brings people together?

A: Bacon is the perfect comfort food. Its salty, its fatty, its crunchy, its delicious. It goes with just about anything. Add bacon to a baked potato, and you've got a main course. Add bacon to a salad, and its the best part of a meal. And who would even know about water chestnuts if some genius hadnt thought of wrapping them in bacon?
A:Ive been doing a blog about beers for the last 2 years, and I got more emails about the (fake) bacon beer than any other review ive ever done. In less than one day, I had a dozen emails from people asking where they could get that beer. That says a lot about the power of bacon.

I: mmmm Bacon! The smell, the taste... I will go with the smell. Bacon! smell definitely brings people together.

Why does Team Bacon! always have a ‘!’ at the end?
A: Because we're different than other teams. More unusual, more edgy, more wild and crazy. It says "Hey, we're here, we're taking over Etsy, get used to it!"

I: Ha, Allegro did that. It is somewhere in our team thread, buried in the archives.

How did the team start?

A: Thats a bit of a story...It started with this thread. There was some confusion at the beginning of the year over possible changes coming to Etsy, especially the Forums. It was rumored that teams might get their own Groups on the forums, but if that were to happen, where would ETC go? Would we need our own team?
More threads were started about jokingly calling ETC "Team Bacon", as bacon had been an inside joke in the ETC section for a long time. Finally on March 21st I thought "what the hell?" and decided to start a real team.
I: Team Bacon! was formed out of a thread started in Etc. several months ago. The practical point of Team Bacon! is to create a social marketing network, which we have done. Our network is continuing to grow, and our Hide the Bacon! challenge on May 17 will be the first test of how we operate as a team.

If someone wants to connect with the team or become a member, what do they have to do?

A: Theres LOTS of ways to get in touch. Messages at the blog, on facebook, or in the Team Thread in ETC. Probably the easiest way is to convo me or one of the other team members.
I: If you would like to become a member of Team Bacon! contact Allegro . We are always looking for active new members and blog contributors. We are vegan and veggie friendly too!

What do you tell people who don’t believe the team is real?
A: Not real?? Who are these people? I'll show them real!

What is your favorite saying or phrase involving the word bacon?
A: "Bacon is proof that God loves us and wants us to be happy" -Ben Franklin. Ok, he was really talking about beer, but the sentiment fits.
I: Bacon! is the new black!
on May 14, 2010 bacon contest etsy food fun humor item feature