We are going to depart from the ordinary for today. This week, I had the great pleasure of attending a viewing of The Devil's Carnival as it made it's way around the country on tour. Given the small and independent nature of the movie, I am going to count it 'handmade'. And if you disagree, I am still going to review it. So there!

First, here is the trailer:

First off, I am a total fan of Repo! The Genetic Opera, so I am biased. Given that, I bought tickets knowing the kind of dark musicals Darren Bousman and Terrance Zdunich (who are on tour with the movie) can produce and I was not disappointed. The whole night started by getting in line full of darkly clad and freakishly fun movie goers. The event itself has much more than the movie going for it, including an old fashioned side show warm up, cosplay competition and sing along/behind the scenes footage of both Repo and Carnival. The energy is infectious! There were people who had traveled 5+ hours to come to the show, which gives you the dedication of some fans. The music is available on iTunes or you can pay $20 for a signed and numbered CD at the even itself (CD are not available anywhere else at the moment). 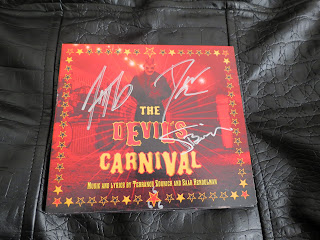 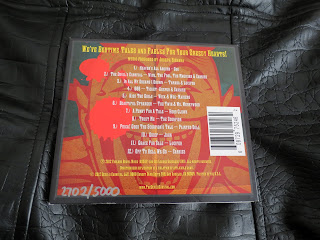 You follow three misfortune souls to the Carnival as they face their individual 'demons'. The mythos and characters created are archetypal, but enjoyable. It is  face paced and chaotic, but some songs are incredibly catchy. I would have to say my top two favorite songs are A Penny for a Tale and In All My Dreams I Drown... but it was really hard to pick a top 2. The cast is full of a wide range of actors and artists, including Ivan Moody (Five Finger Death Punch), Shawn Crahan (Slipknot), Jessica Lowdens (90210), Bill Moseley (Repo! and a bunch of horror movies including House of 1000 Corpses)... and Terrance Zdunich (GraveRobber from Repo!). I do have to say that some voices were better suited for musicals than others, which is probably my only negative critique. What is really amazing about this movie is how short of a time they had for filming... 1 week and they recorded most of the music in 1 day! This movie was an act of love and devotion, and it shows. It was filmed in a carnival grave yard, which must have been so cool to do! After the movie, there was a question and answer session with Darren and Terrance, followed by the two of them signing posters and other official merchandise and posing for pictures with fans (which they put up on their Facebook page). Since the movie and tour isn't backed by a studio and they had to raise their own money to do all of this, they aren't signing other ephemera from other movies etc to try and recoup their costs and start the next installment of the series.

This movie is not being distributed, so if you get a chance to see this in a theater, do so! You wont regret it (and bring cash if you want to buy some swag while you are there... no credit cards accepted)! The only thing I regret is not buying my tickets sooner, because by the time I bought my tickets all the slots for the meet and greet were gone. If they end up making a second one (and a third) I will DEFINITELY be buying tickets... and buying them early! I will also be first in line to buy the DVD/s when that comes out.

Now excuse me while I go watch some Repo! for old time sake.... mmmm... GraveRobber....

If you don't want to take my word for it... read more reviews etc below! They probably will use more words than I do.
First Showing Review
Fear Net
Dread Central
Fangoria
Horror Movies.ca